Hiring great people is one of the most important and most challenging things we do in our professional lives. The hardest part is often just knowing what to ask applicants to make sure we're getting the right person for the job. We know there are certain attributes the ideal employee will have, but what exactly are they and how do we test for those traits in applicants? And do it in the limited time you have? This pressure often leaves one feeling overwhelmed and even a little frustrated.

I recently had a conversation with a Talent Acquisition Leader that left me shocked. While talking about how important it is to hire the right person, I sensed an alarming degree of indifference around hiring accuracy altogether. I understand this is not top of mind for everyone, but this was coming from the Director of Talent Acquisition for a Fortune 5,000 company.

I remember thinking, ‘surely this person understands that hiring the right person (hiring accuracy) has a greater impact than anything else HR does.’ So, I decided to ask him: ‘If you had to choose between hiring accuracy and hiring efficiency, which would you choose?’ Sure enough, he answered quickly and confidently, “hiring efficiency--for sure." Sadly, but not surprisingly, this leader was removed from the Talent Acquisition role and reassigned somewhere else in the company in less than three months.

I’ve reflected many times about that conversation and his answer. Fortunately, most leaders involved in hiring recognize how paramount hiring accuracy is, or they're at least quick to adjust their priorities accordingly once they do come to terms with this reality.

It’s implied in the common saying, ‘Hire Slow, Fire Fast’. And in Linkedin’s most recent Global Recruiting Trends Survey Report, quality of hire (the metric for hiring accuracy) once again topped the charts as the most important performance KPI for hiring teams, according to ~4,000 talent acquisition leaders surveyed. It topped the list for the fifth time over countless metrics considered less important, including those related to hiring efficiency - time to hire, cost of hire, etc.

Still, despite topping the chart, only 40% of Talent Acquisition leaders ranked quality of hire as #1. For those that just aren't getting it, below are two reasons why hiring accuracy matters far more than hiring efficiency.

Reason 1: If you hire wrong the first time, it doesn’t matter how ‘efficient’ you were, because you’re going to have to do it again.

An inefficient hiring process looks a bit like this graph, with the length of the bar representing the time it takes to fill an open role, with all the consumed resources that come along with that.

Improving hiring efficiency means less time and resources go into each hiring decision, resulting in something that looks like this.

At first glance, you might say, ‘Great--improving hiring efficiency should be our number one priority when it comes to hiring, right?' WRONG.

If a restaurant gets a customer’s order wrong, it doesn’t matter how efficient they were at making the wrong order. They’re going to have to do it again.

The same is true for hiring. If you get it wrong, you’re going to have to do it again. Now let’s consider what happens to those ‘hiring efficiency’ gains when that happens:

Note that not only are 100% of the gains from hiring efficiency erased; the company is actually worse off for having hired “efficiently” if it’s at the expense of accuracy.

If you’re efficient, but not accurate, ALL gains from efficiency will be offset (likely 3-5x) from having to do it over again.

Reason 2: Hiring efficiency delivers no more value after the hire is made; hiring accuracy continues to deliver value as long as that person is employed at your company – and usually longer.

You'll find a good analogy for this in marriage. No one looks back at the end of their life and says, ‘I wish I’d gotten married after 9 months of dating, instead of 11.” When taking everything into account, it's marriage accuracy – not efficiency - that matters most because of the greater impact who you marry has on your life. The same principle is true for hiring.

For this second reason, hiring accuracy trumps hiring efficiency not because of what happens during the hiring process, but what happens after.

Good hires and bad hires create very different amounts of value for your company, as illustrated in the chart below. 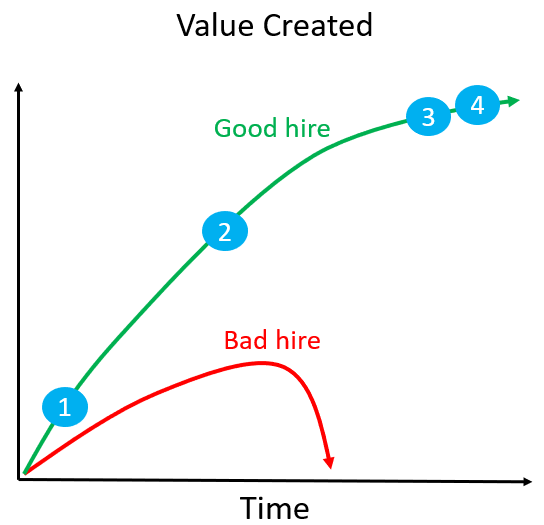 A few things to note here:

You’ll notice in the chart that the y axis represents value created, not ROI. That matters because your company begins to incur significant costs the moment you decide to fill a role and even more so once you've hired the person.

You’ll find some of these costs below:

It is almost certain that these costs constitute your company’s largest expense (especially those on the right side) and the only way for your company to recoup these costs is for your hires to create more value than they cost. 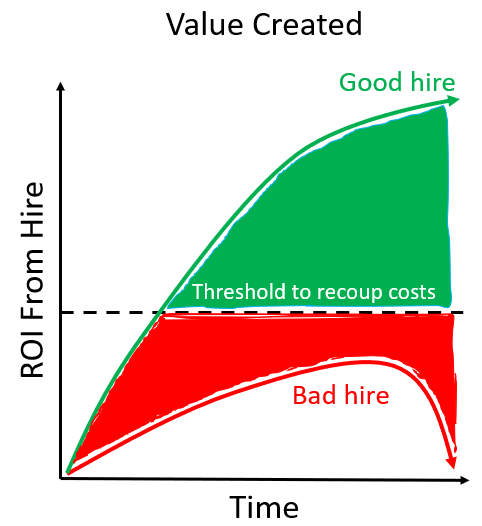 In many cases, a bad hire may not even produce enough value to recoup the costs of having them employed.

Hiring accuracy – not hiring efficiency – is the only way out of this costly problem.

When it comes to hiring, the only thing worse than hiring the wrong person is having a hiring process that consistently hires the wrong people. This is why a company’s attitude (and understanding) around hiring accuracy matters – it will influence the extent to which they choose to invest in having an accurate hiring process.

Ignoring hiring accuracy – even if you’re hiring efficiently – becomes a vicious cycle and can create irreversible damage to your company. I’ve seen companies forced to downsize by 25-75% because they didn’t prioritize hiring accuracy. Excited about growth, they began to frantically hire people, but they didn't take the time to ensure their hiring process would lead to accurate hiring decisions. In both of the specific cases I’m referring to, they were lucky to have survived at all; others have not been so lucky.

Despite the temptation to focus your attention on hiring efficiency, the data suggests this is an enormous mistake. Focusing on hiring accuracy will produce 15-20x more ROI than hiring efficiency ever could. One fifth of that ROI comes from not having to repeat the process to replace the bad hire later; the rest comes from how much more value a good hire creates for your company over time vs. the more limited value a bad hire creates.

For more information about Journeyfront and free hiring resources visit: 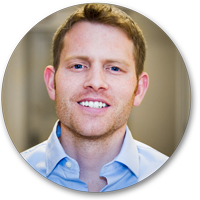 ABOUT THE AUTHOR | Daniel Ash

Daniel is the CEO and Co-Founder of Journeyfront. Before Journeyfront, Daniel worked in private equity and management consulting, working with companies to grow, build amazing teams, and solve some of the world's most complex challenges. He now gets to do that at massive scale with Journeyfront. Daniel is on a mission to crack the code when it comes to job fit. He believes every person in a job that's perfect for them is the key to a world where companies and individuals work together to accomplish great things. He can be reached at daniel@journeyfront.com.

Get data driven hiring updates sent straight to your inbox

Tackle turnover in 2019 with this ultimate hiring guide.

Discover how the world’s most innovative companies are reducing turnover by screening candidates for turnover risk. 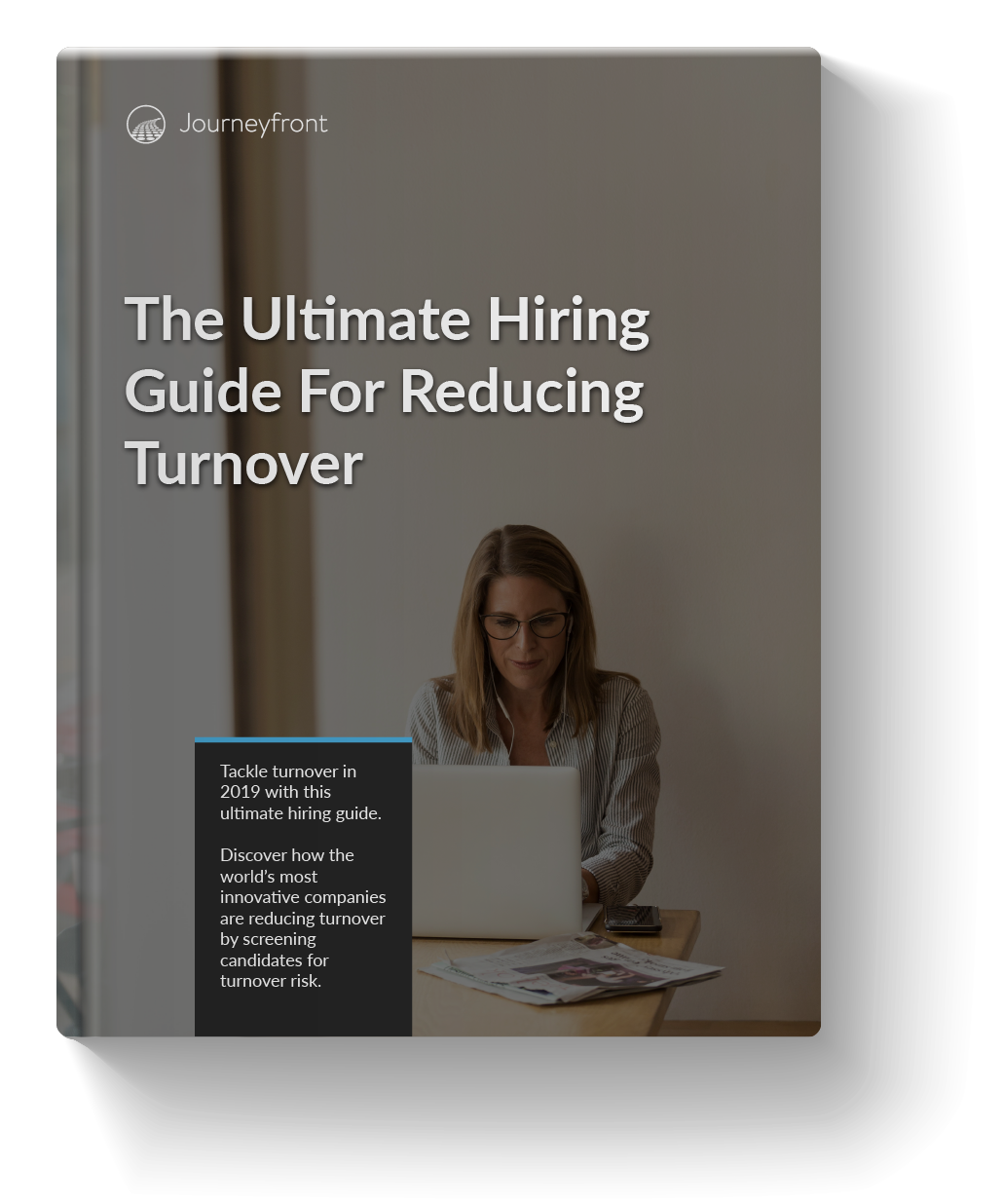 Hiring great people is one of the most important and most challenging things we do in our professional lives. The hardest part is often just knowing w...

I recently had a conversation with a Talent Acquisition Leader that left me shocked. While talking about how important it is to hire the right person,...

The Pros and Cons of Extroversion in the Workplace

Extroversion is one of the most widely talked about personality characteristics of all time. There have been books written about extroversion and intr...

Increasing Gender Diversity Starts with the Hiring Process If you’re serious about increasing the diversity in your workforce, start with the hiring p...